Some of the nice things people have said about Fyrish and our music. 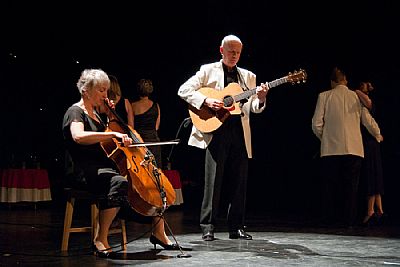 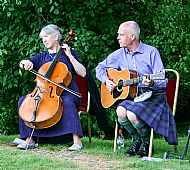 “FYRISH are a refreshingly different folk duo…
Dave Cowan is from Glasgow, a gentle, subtle singer possessed of an intriguing mellow voice..
Marjorie Paterson is originally from the Black Isle and plays the cello beautifully….
It’s a winning combination that continues to win them fans wherever they play.”   Chester Folk Festival 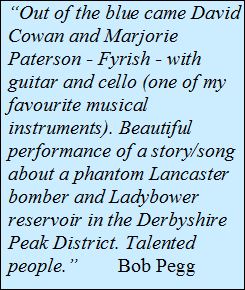 "FYRISH performed sensationally at the Doncaster Folk Festival this year. The amazingly dextrous voice of Dave Cowan is complimented by Marjorie Paterson's mellifluous cello.Their repertoire is intelligently selected and a set by them is a sheer delight to experience…..”     John Wheeler, Doncaster Folk Festival.

“….I am always pleased to hear Dave's selection of songs and Marj's lovely cello at Barnsley Folk Club and I do know that they are well received and getting more popular by the minute.  Such lovely unassuming people whose music is certainly popular with Barnsley Folk Club's resident musicians."  Ray Padgett, Chairman, Barnsley Folk Club

"Hi David and Marjorie, thank you so much for coming to Ardross Hall last night, I loved the concert and had the songs going round my head all day today. All the best, Juliette".  Ardross Community Hall

“David Cowan is a compelling singer with real honesty in his (very fine) voice. You find yourself being drawn to his music in a quite magical way – and that’s even without the allure of the oh-so-subtle cello accompaniments provided by Marjorie Paterson. David sings songs of rare power; his rendition of When The Boys Are on Parade, for instance, challenges all of us to think about our attitude to soldiering and war. So: go and listen to him and Marjorie, there’s a treat in store for you…” Steve McGrail

"...thank you so much for playing in the service on Sunday. 'Sweet Thames Flow Softly' was inspired!"              Sean Robertshaw, Holmfirth Festival of Folk