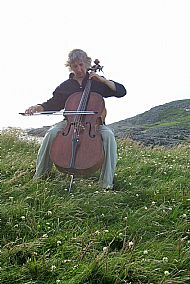 Marjorie has been interested in music, both listening and playing, for as long as she can remember. There was always music in her house, whether her mother singing Gaelic songs or her father’s fiddle tunes.  Marjorie says: “My father used to stand outside my bedroom door playing tunes to send me to sleep, the music fading as he walked further away.  If I didn’t go to sleep quickly, I learned that I got more tunes!”

Marjorie started playing the cello in school in the Black Isle. She has always preferred traditional music and she particularly enjoys accompanying singers. “I’ve always liked a good tune; old or new, from near or far – Jean Redpath or The Byrds”.  She has played cello in bands such as Tryst, The White Street Band, The Govan Spoonful and the Wall 2 Wall band.  Marjorie has also recorded cello accompaniment on CD’s for Ian Davison, Gifford Rolfe, Tom Bliss, Gerry McNeice, Wendy Arrowsmith, Richard Kitson and Michelle Howell.

Marjorie’s main instrument is the cello, but she also plays some fiddle and in recent years she has been adding songs to her repertoire.  She is learning Gaelic and can sing one or two songs in that language.  Marjorie’s mother was originally from the Isle of Lewis and was a Gaelic speaker as was Marjorie's aunt Margaret - a former Mod gold medallist.  On Aunt Margaret's death in 2014 Marjorie inherited her clarsach - a new musical challenge! 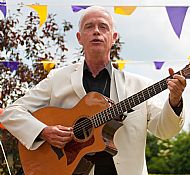 David has been singing and collecting folk songs since he was at school. (And that is so long ago that trams were still running in Glasgow!) In primary school at age 10 he won the school singing prize – not because he was the best singer, but because he was the only one prepared to stand up and sing in front of the class.  He has been performing ever since – learning folk songs and to play guitar, initially at Scout campfires and at the school folk club.

Early musical influences were The Clancy Brothers, The Dubliners, The Islanders and The Corries as well as the pop music of the 1960’s.  In the early 1970’s David sang in a folk trio called ‘Tricycle’ which won a talent contest in Glasgow and, as a result, recorded some session music on an ‘easy-listening’ folk compilation and also released a full length album which in those far-off days was called an ‘LP record’.  Tricycle went on to do a television spot on STV's ‘Thingummyjig’ and then, having scaled those dizzy heights, retired to take up proper, paid employment.

In the past, David has won unaccompanied singing competitions run by The Traditional Music & Song Association, but he is better known around the UK clubs and festivals as a singer/guitarist performing both contemporary and traditional songs.  His song 'These Old Feet Still Walk the Walk' won the Songwriter competition at Ugie Folk Festival, near Peterhead, in July 2013 and the same song was awarded a commended entry certificate in the singer/songwriter category of the UK national songwriting contest 2013.